While I was writing this I was perusing Facebook for before pics…. Holy hell I haven’t updated any of the pics of our house since, like, forever. So I’m starting a little series so you can all be creepers and see what our house looks like. First up: the boys bathroom.

So, one Tuesday night I decided to paint the upstairs bathroom.

Lovingly referred to in our house as “the boys bathroom”

I swear we’ll call it that forever. Even if we end up having daughters someday. (god for freakin bid)

This is the second to last room in our house that has remained unpainted.

Paint = from the garage that the previous owners left us. It was all watery and separated. I thought I’d actually have to purchase paint and that this project would die a long slow death because I am a lazy decorator.

Took nasty paint to Lowes and asked them to shake it and they did. Walla. Free paint.

Frame around the mirror = Husband the Handyman. We bought 3 prefinished strips of trim for $10 each and Hubs cut them and glued them to the mirror. ($30)

I didn’t add in the cost of the wine. Wine would explain the touch ups I’ll have to do on the ceiling. And, yes, I did tape. Before pic from when we looked at the house. Pink explosion. (taken from the door) 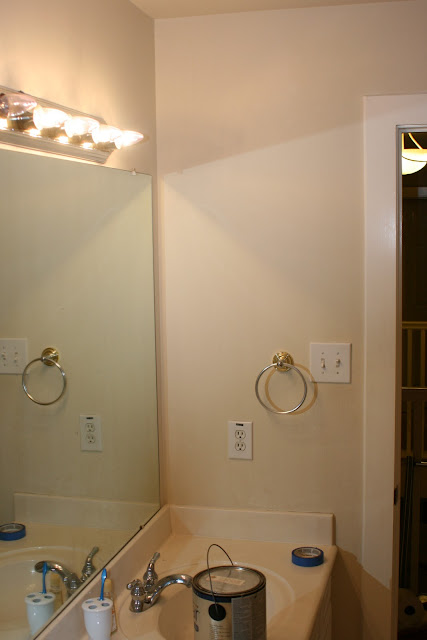 Before pic when I realized “holy balls, I should probably take a before picture before I start painting”
(taken while standing in the tub) 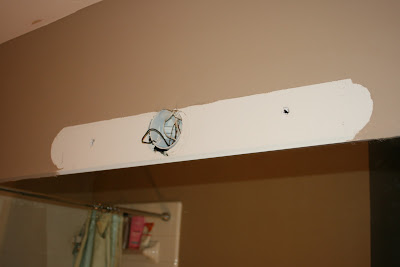 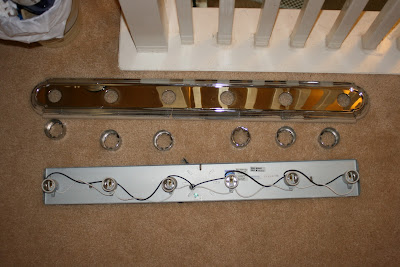 Another Progress Shot (he’s pretty proud that he took down the old light. Yes, he is an Enginerd and took a pic of all the parts to the old light.) 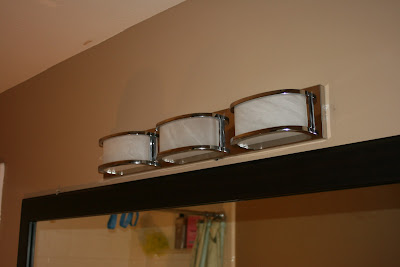 New light installed thanks to Handsome Husband the Handyman (see that? Alliteration bitches!) 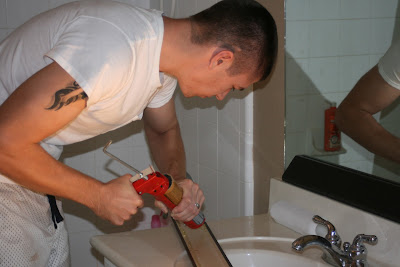 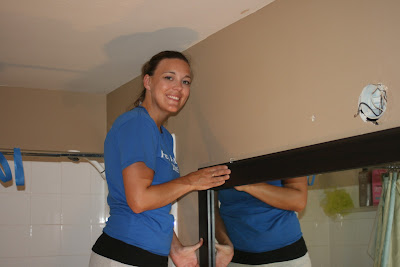 Me “helping” hold up the trim around the mirror…..

And if you look in the mirror you can see the hideous shower curtain we used to have in there. blech.

And if you look above my head you can see where I hit the ceiling with the roller despite taping and edging.

its the wine I tell you.

I’m gonna be a bizzo blogger and not post the complete transformation till tomorrow. Bwahahahah (evil Halloween laugh)